Our part of the world is frozen pretty solid right now but I still got out for some paddling in December. Never mind that it was in Florida where their winter temperatures (water and air) were nearly as warm as it ever gets here in the summer. On Thursday I paddled an afternoon in the ocean to have fun and hone my skills, and on Friday our family went on a tour on protected waters to see some Floridian wildlife. I'll cover that tour in a separate post.

First, since I don't often get a lot of coastal paddling in and I wanted to work on those skills, I hired Michael Shugg to do an afternoon session of coastal kayak skills with me. Mostly, I wanted to learn to play and tour in surf conditions. Michael is an American Canoe Association instructor from Orlando and he recently started the company Adventure Spirit Kayaking. We started out at a Port Canaveral boat launch, not far from a number of cruise ships, then headed out around the point to the beach at Cape Canaveral/Cocoa Beach.
Once out of the port area and clear of the boat traffic, I tried a couple of rolls on both sides to get rid of any rust that might have built up from a couple of months off of the water. We then took advantage of the bit of swell (1.5 feet?) to catch some waves coming in to the beach, working first on coming in slower than the waves and in control, as you would do with a load while touring. That was easy enough so then we spent most of the afternoon working on catching and surfing the waves. On my very first attempt to surf some waves in toward shore I was broached (the following wave pushed my stern sideways until I was parallel to the wave) and I quickly capsized since I hadn't yet learned to lean into the wave. I rolled back up quite nicely so it was great to see my roll working in the real world conditions.

It was also remarkable how warm the water was. I was pretty comfortable in just a rash guard and shorts over neoprene shorts. Just guessing, I'd say the water was pretty close to 20°C and the air was close to 25°C. Like I said, warm summer conditions (if we're lucky).

I did have difficulties with a couple of aspects. First, it was hard for this prairie guy to time the waves - I often seemed to pick a little one that didn't surf me well, then I'd get halfway to the beach and end up getting the larger wave(s) that were following the one I picked. These waves would be steeper by the time I was trying to catch them and I wouldn't get a good ride before being broached. I also had some trouble picking the right spot as they always seemed to be bigger, 'just over there.'

Another thing that I did wrong at first but which quickly got better (until the end again when I seemed to be losing it), was that I leaned the wrong direction while broaching and the wave would dump me upside down pretty quickly. I learned (thanks to Michael) that I needed to keep the hull toward the beach while bracing on the wave. When I did that well, the wave couldn't capsize me. 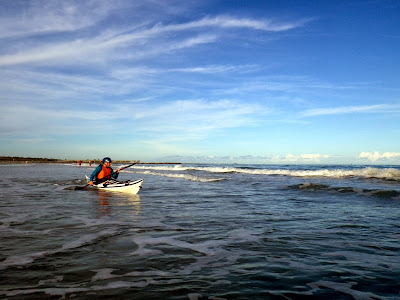 Finally, I had troubles controlling my angle on the wave. Most of my paddling is forward (or backward) and I can easily control the direction with correction strokes. Surfing a wave, you use a stern rudder which although I know how to do it in general, it's not totally intuitive or natural for me yet. I have to think about it and by the time I think about it, it's too late and I'm starting to broach on the wave.

I surfed backwards (on purpose) once or twice and in some respects that was easier for me since I could see what waves were coming. Heading out through the waves was interesting - that's the first time I've been smacked in the chest by a (short) wall of water. It was easy though to reach past the wave, plant my paddle, and power through. That's relatively small stuff though - I can see how that would be a challenge in some bigger surf.
By the time we were done I had salt water in every orifice in my body and had been more or less pummelled by the breaking waves (usually right at shore where it was very shallow). I did get Michael to take a video of me - unfortunately he captured my surf that ended in my one and only wet exit (I later practiced some rescues, but those were intentional wet exits). Looking at this video (below), it looks like I was bailing and setting up for a capsize and roll long before the surf actually dumped me. By this time it was getting toward the end of the afternoon and the surf had rolled me rather a lot of times. I guess I was maybe starting to anticipate what seemed inevitable?


We finished up the afternoon with some rescue practice - more rolling on each side, then re-enter & roll, then cowboy re-entry (which went very well other than popping my day hatch cover loose and getting my crackers soggy), then bow rescue, then a t-rescue. After that, we paddled back to the launch, a trip I'm certain was much longer than it was on the way out. Paddling back through the port entrance, we passed two cruise ships on their way out to the ocean, including a Disney ship which was just as loud as the theme parks my family had just visited in the first 2/3 of our trip to Florida. At the same time that one of the cruise ships was passing us, we paddled past a moored gambling cruise ship (much smaller than the other 2 ships, but a large ship nonetheless). We were no more than 60' from each of these massive building-sized boats in our tiny watercraft.

All in all it was a great afternoon on the water. I was glad to have made a new paddling acquaintance in Michael, I learned a lot, and I have lots to practice on Lake Diefenbaker or Lac La Ronge when the water warms up a bit. 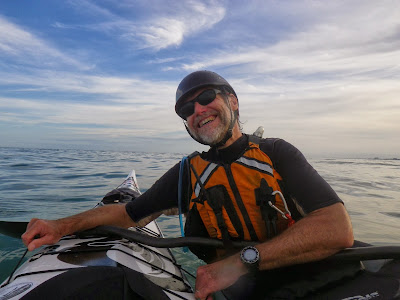 If you find yourself in Florida and itching to get out kayaking and learn some skills, I highly recommend Michael Shugg and Adventure Spirit Kayaking.
Blathered by Bryan Sarauer at 12/18/2013 12:41:00 am