Out Practising What I Preach

Last Saturday we had gorgeous weather for the last day of March. Sunny, calm and warm with a high of 14°C. It was a great day for a paddle and with the kids at the grandparents my wife & I donned our paddling gear and got out in the kayaks for a couple of hours on the South Saskatchewan River. The river is still mostly frozen, but through the city it is open and most of it is available to paddlers.

I was wearing my dry suit (Barrier suit from Level 6) with long underwear (wool top, polypro bottoms) and a fleece vest underneath. On my hands I wore neoprene gloves (2mm), and on my head I wore a thin neoprene (1mm?) cap. On my feet I wore my new (used) Chota mukluks for the second time but the first time where I was in the water.

K wore a wetsuit with long underwear underneath, and a fleece sweater and softshell jacket over top. Although K declined to test her immersion gear, if she had ended up in the water she would absolutely have been cold, but likely would have been able to function well for a period of time. She had neoprene paddling gloves at hand, but chose not to wear them.

I'll add my observations and lessons learned at the end. In the meantime here are some pictures from the outing, and a couple of videos of me in action (and getting rather wet). 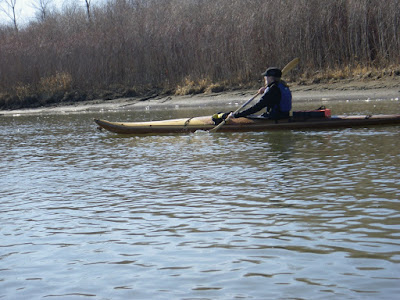 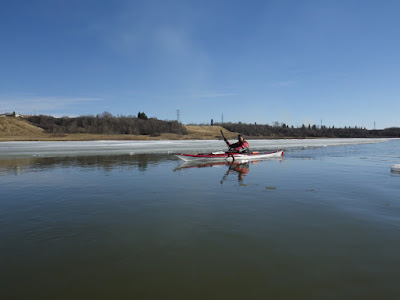 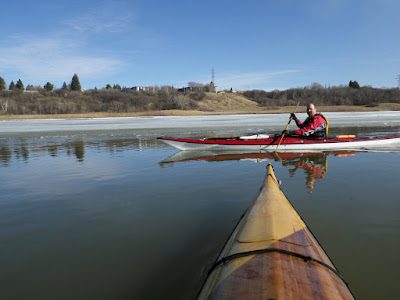 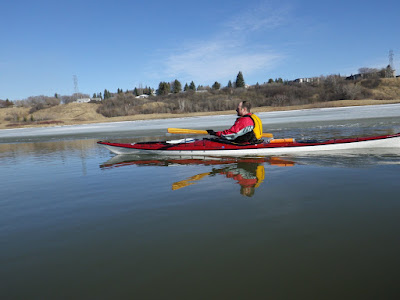 A video of one of my rolls in this ccccooooolllllddd water. I only did a few! (Note that at 5 seconds in my head is high, my head reaching away from the water. That is why I needed to finish the roll with a forward scull to get a little extra lift.)


A short segment of me practising my scramble rescue in conditions that were less ideal than the pool I had practised in a few weeks earlier. Things were much harder this time.


So, after getting into that cold water and practising, I can say I learned a few things (good, because that was the whole point).

So, in conclusion I need to:
The take home lesson of the day: Find a safe way to practice your rescues in less optimal conditions because that's where you'll need them.