May 20th last week was Red Cross National Lifejacket Day. I didn't hear anything about this occasion until late that night. Coincidentally, on the same day there was an unfortunate accident on Echo Lake in south eastern Saskatchewan. A group of school students was out on the lake when two of the canoes capsized due to sudden winds. One of the students that ended up in the cold water was not wearing a life jacket or PFD and apparently needed to be resuscitated by the RCMP. Thankfully, everyone was eventually OK though 4 students were treated at hospital for hypothermia (they were in the water for an hour).

So, with that event calling to attention the importance of PFDs, I received a phone call from CBC television the following morning, asking to talk to me about life jackets. I am the "Publicity Director" for the Saskatoon Canoe Club and I guess based on that they figured I was the guy to talk to. Coincidentally, I was home with nothing better to do than to build a deck (my daughter was in daycare for the day). After discussing the issue of paddlers and life jackets on the phone for a few minutes, they asked if I would be willing to do an on-camera interview. I agreed and 90 minutes later I was down at the boathouse.

The reporter and cameraman chatted for a bit, asking general questions about the SCC, it's policies, and it's equipment. The cameraman recorded a ton of video throughout, then they did a 3 or 4 minute interview. The questions were pretty straight-forward, and I answered as best as I could. One question threw me off a bit though - they asked if there was a story I could share relating to when I was thankful to be wearing a PFD. Of course, there are several things I could have mentioned (wiping out in Farside with Rob, wiping out in Corner Rapids with Rob photographing, wiping out with Rob....), but the only thing I could think of immediately was some lame story about the first time I went down Otter Rapids - I was so excited to be running the rapids that I had completely forgotten to zip up & buckle my life jacket. At the end of the interview she asked if there was anything else I would like to add. Of course, I couldn't think of a single thing to say.

It was only later while I was out for a paddle on the river that a whole host of ideas came to mind. I should have talked about proper PFD care (keep it out of sunlight, treat it with a protectant such as 303, clean it, dry it, check for damage, check it's buoyancy, check for breakdown of the fabric, and replace it when it's old), getting proper paddling skills, having the right equipment on board, wearing the right clothing, dressing for immersion, being aware of the weather and your surroundings, and not over-estimating one's skills. They were still at the boathouse filming extra footage so I stopped back in and talked to the reporter about my concerns. They were willing to re-shoot the interview, but advised me that they thought what they had was good enough, that it was PFD's specifically they were most interested in, and that the segment was going to be severely edited anyway.

So, I got back into the kayak and continued my paddle. The cameraman was in the area shooting for about an hour, shooting film inside the boathouse of the equipment, taking close-ups of the PFDs, shooting film of me paddling off into the high winds and chop on the river, etc.

When I later saw the video, I was rather surprised to have seen my interview cut down to that one lame story. You can find the video at http://www.cbc.ca/video/#/News/Local_News/Saskatchewan/ID=1500771460. Early in the piece are several kayakers shown out on the water without PFDs. One of them is Jimmy. It looks like he might even be teaching some lessons, something I would hope he would have better sense than to be doing without a PFD, especially on such a windy day on the river (perhaps that footage was shot some other time).

The news video also shows a fellow who talks about mandatory wearing of PFDs, something that has been coming up recently. I certainly hope the lawmakers in Canada do not decide to go that route. Although I am a strong advocate of proper PFD use, I believe people should be able to use their own judgement based on the conditions in which they are paddling. Perhaps it should be mandatory for school groups or situations involving groups of kids, but there are situations where I do not feel it necessary to have mine on at all times (calm waters, warm water, no kids on board, etc.) 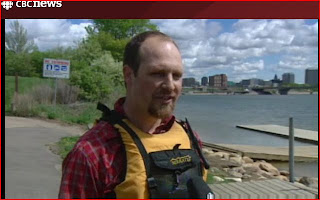