May 22-23, 2005 - North Saskatchewan River - After first planning on doing the Red Deer River, then the Montreal, then the Torch, my wife & I opted to spend the weekend on the North Saskatchewan River. We had originally planned on leaving Saturday morning but my wife wasn't into starting out in the steady rain that persisted most of the day so we put it off until Sunday. Sunday morning we put-in at the regional park north of Langham (~40 km from Saskatoon) and paddled about 40 km downriver, about 8 km past the Petrofka Bridge (Hwy 12 to Blaine Lake). We camped along the shore in the least muddy dry spot we could find. Monday we continued the remaining 30 km to Fort Carlton where my in-law’s were supposed to meet us with our car. Unfortunately there was a mix-up regarding what we thought was pre-arranged to meet at 4 pm at Ft. Carlton unless we call and tell them otherwise. Earlier Monday we hiked up out of the river valley to a hilltop in order to get cell coverage and tried to call just to confirm the time/place for our pick-up but only got a message manager. We eventually arrived at the Ft at 3 pm but when we tried to call them again just got the message machine again. It wasn't until 4:45 that we were starting to wonder where the heck they were that my wife got through to her grandma who told us that they were sitting at our house awaiting our call! Turns out something wasn't working with their cell and the messages weren't being recorded either. Oh well, they found us eventually.

We saw a lot of wildlife on the river, more than I'm accustomed to seeing on the South Saskatchewan River in the area around Saskatoon. There were Pelicans, tons of ducks, lots of geese (and a few goslings), a bald eagle, 4 turkey vultures, an osprey, a variety of hawks, a deer, beaver, muskrats, a coyote, plus countless shore birds, terns, bank swallows, etc. We were in a narrow passage between a couple of islands when we came past a little clump of willows hanging into the river. As we came past the bush we startled a beaver, two ducks and a coyote from exactly the same spot. Either they were having a wildlife association meeting or we spared the ducks from becoming lunch, and spared the beaver from witnessing the event (of course we probably doomed the eggs if there was a nest). At another point we passed some pelicans resting on a sandbar. We stayed a respectful distance of maybe 100 yards or so away across the channel. Once we had drifted past them and were clearly moving away, the 6 pelicans took off then circled around behind and passed in formation a few feet above our heads, maybe 15 feet to our left before heading off down the river ahead of us. It seems they were just as curious about us as we were of them. That certainly is the closest I've been to a pelican in flight before, let alone 6 of them.

The river itself is much muddier than the S. Sask., which is very sandy in this region, and our gear and canoe were all covered in a sticky mud. It wasn't bad on shore but at the waters edge it was a gooey mess and every time we got in the canoe we brought more mud in with us. Having our dog with us made it worse as she’s not too good at washing off her paws before bringing them inboard. At one point I had gotten out of the canoe to go ashore and sunk in mud to within a few inches of my knees. I thought I was going to be stuck permanently but I did manage to free myself after a lengthy struggle.

Hayman Lake, Churchill River Trip - June 2nd-5th, 2005 - Annual NorthStar Expeditions guys trip. You can find Rob's pictures from the trip at the link. Things to note when we eventually do a write-up: 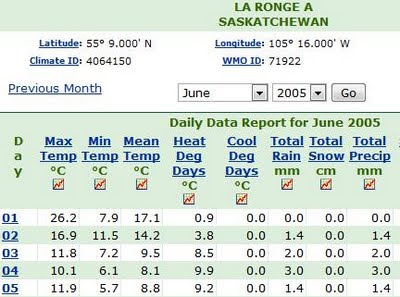 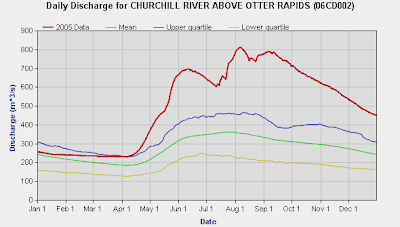 Sturgeon Weir River - Amisk Lake - July 2nd - August 6th, 2005 - My wife & I chose the "West Weir" for my 3 year old daughter's first extended wilderness canoe trip. We arrived at Maligne Lake (pronounced locally as Maleen, rather than the way I was saying it) near Pawistik Lodge where the Sturgeon-Weir River crosses the Hanson Lake Road (Hwy 106), about 50km East of Flin Flon & Creighton, around noon on Saturday. When we approached the river crossing, things were a zoo with hundreds of people and many dozens of vehicles everywhere. We had arrived at our start point just prior to the expected arrival of the 29 canoes participating in the Saskatchewan Centennial Canoe Quest, a race across the province in 25' 6 person canoes. We spent some time watching the leaders race across the finish line before unloading and preparing to embark on our journey. Unfortunately, during this time the threat of storms were moving in. We covered the canoes with tarps and headed off to do the shuttle and get a bite to eat, all the while hoping that the storms would pass. We were granted our wish and by the time we were back at the put-in things were looking up. 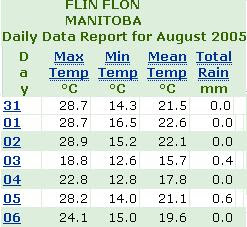