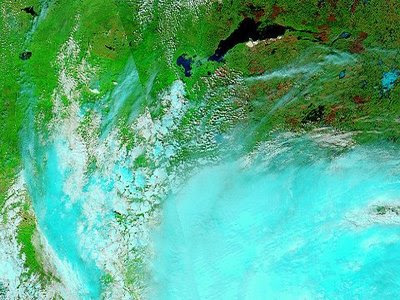 Yay, the ice is off of Cree Lake & our plane can land! The above satellite image is from June 21st, the most recent date where the area wasn't completely obscured by cloud. Cree Lake is in the upper right quarter of the image just north of the wispy clouds and the water is coloured black. Wollaston Lake to the NE on the edge of the image is still covered in ice, visible as light blue. Did I mention the image is from June 21st! If you look at the large version of the image, you can see a forest fire burning on the eastern side of Cree Lake, what must be very close to MacIntyre Lake Lodge. By scrolling back through the satellite images, I was able to determine that the ice went off of Cree Lake during the few days up to June 15th.

These images are from the MODIS Rapid Response System - http://rapidfire.sci.gsfc.nasa.gov/
To quote from the web site:

The MODIS Rapid Response System was developed to provide daily satellite images of the Earth's landmasses in near real time. True-color, photo-like imagery and false-color imagery are available within a few hours of being collected, making the system a valuable resource for organizations like the U.S. Forest Service and the international fire monitoring community, who use the images to track fires; the United States Department of Agriculture Foreign Agricultural Service, who monitors crops and growing conditions; and the United States Environmental Protection Agency and the United States Air Force Weather Agency, who track dust and ash in the atmosphere.

It's pretty cool stuff actually. As long as the clouds aren't in the way, I can see where fires are burning and what the ice conditions are like. The clouds that have obscured things the last few days have carried rain that has put out the fires in the area (including one that stopped 30m from a colleague's research site near Key Lake!). Here's an edited version of a fire map available from the site from the period of 06/10/09 - 06/19/09: 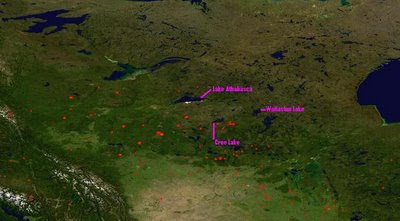 Thankfully, it shows no fires in the region North of Cree Lake where we'll be.

Four days from now I'll be on Cree Lake about to head down the Cree River. Late ice-out should mean that the Lake Trout are in shallow waters and hopefully they are hungry! After we spend half a day or so on the lake, then we'll be off downriver and into the territory of Grayling, Pike and a few Walleye (this river is not a major walleye destination, but there are couple of good spots reported).
Blathered by Bryan Sarauer at 6/24/2009 06:06:00 pm